The other day I was about a block from the customer, driving a tractor trailer when I was stopped by a red light. After a few minutes, the light turned green, but for some reason, the van in front of me continued to sit. I noticed the driver was not ensconced by his cell phone as so many drivers are these days – but rather he was looking intently out to his left.

As I looked toward that same direction, I immediately saw what had captured his attention. It was a tiny ball of fur running as fast as its tiny legs would take it across the two oncoming lanes of traffic and making a beeline for his van!

The tiny kitten ran under his van and toward the rear, and about that time the van driver began very slowly inching forward. I could see that the kitten was behind his rear axle and not in any immediate danger of being run over – so long as it didn’t move anyway.

As the van pulled clear and accelerated away the kitten was exposed. The tiny creature took one look at my truck and its tiny legs launched it underneath the front of it in an instant!

Since I am both a sailor and a trucker, I am more than capable of extreme levels of profanity – so I will spare you repeating the words that flew out of my mouth. Though I am sure you can probably imagine.

There was no way I was going to move my truck until I was certain the tiny kitten was not under any of the eighteen wheels, so I turned on my four-way flashers and set my brakes and climbed out. Keep in mind I am now in heavy traffic and though the closest of the other motorists may have seen what happened, the rest have no idea, so they begin to go around me.

As I look under the truck, I don’t see any sign of the kitten, and I look everywhere. The kitten is nowhere that I can see which means it is somewhere that I can’t see – and none of those places are safe! I did know it never came back out. So it still had to be there somewhere. Eventually I looked on the passenger side between the two sets of drive tires, and there wedged as tightly as it could get into the space between the tires was a tiny ball of fur.

Had I moved the truck at all, there would have been no escape and the tiny little kitten would have instantly died a horrible death.

Luckily for the kitten, I hadn’t moved an inch, and it had not darted out the other side into the traffic. It was terrified, and panting and shaking as I reached in and grabbed it by the scruff of its neck and pulled it out of its almost fatal hiding place.

Some of the other motorists that had remained stopped behind me,  could now clearly see what had caused me to stay stopped in the middle of the roadway. I can only imagine what must have been going through their minds as I walked back around to the driver’s side holding this kitten out in front of me.

The fuzzy critter was fighting for its life, not having any idea if I was a friend or foe. It was not taking any chances and tried to claw or bite any part of me it could get a hold of.

I have some nice puncture wounds to show for its effort.

As I opened the door of the truck and put the kitten on the floor inside it immediately made a run for a space under a storage locker behind the passenger seat. See the dark picture I took a little later after I was parked in a safe place. I texted that picture to my wife with a message that we had “been adopted” by another kitten (I may explain that later with another story about another cat – but as they say – that’s another story).

I called her later after I was finished with the customer and getting ready to head home, and I explained what had happened. She said she would call our vet, which she did and told them I was on my way and basically what happened.

Since I didn’t have anything to contain the kitten, I looked for a suitable box and found an old banana box next to a dumpster with plenty of big round holes in it. Not ideal maybe, but it would have to do for the time being.

When I arrived at the vet they said they needed a name for the kitten to put in their system – I told the ladies at the front desk that I hadn’t had time to think about that let alone decide on a name, but how about “Roadkill”.  Though I was joking they failed to see the humor and thought that idea was a terrible one and suggested “Roadie” instead – assuring me it could always be changed later. I told them fine. For now – until we figure out a name.

Longer story shorter, the kitten had been injured by some animal – probably a hawk, which gashed two wounds into it’s back removing her fur and top layer of skin. Otherwise, miraculously the attempted abduction didn’t cause more serious harm. This may be why it was so desperate to get under and stay under cover. Who knows?

Since she was out in the open, flies had laid eggs in the open wounds which were now festering sores. The vet took care of her wounds, did an exam, prescribed antibiotics, de-worming medication, gave us some kitten food and instructions to follow for the next several days – and told us it was a girl.

So she came home with me, and I made her a safe habitat in a corner of my office in a large dog crate. That way she is safe and secure and has plenty of food and water and time to heal without having to be bothered by our other cats.

She dove under my truck hoping to escape whatever was terrorizing her and hoping for a better life. Despite all odds, she survived all that, and now she is much loved and very happy in her new home with us as we continue to do all we can to take care of her as she heals. 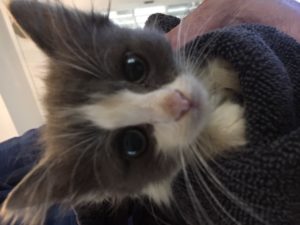